The Catcade Rescue and Lounge: Check Out Chicago’s First-Ever Cat Cafe AND Arcade! 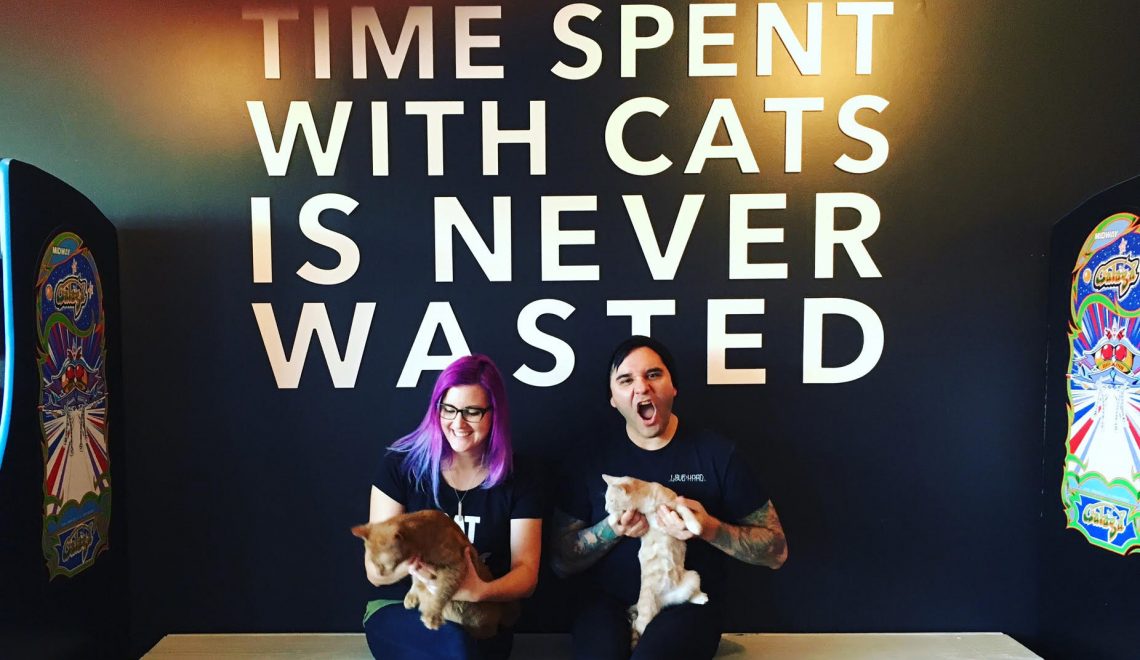 What’s a Cat Cafe? It’s a place where you can sip caffeinated beverages, play with adoptable felines, and maybe even welcome one, officially, into your forever home! In other words, if you’re a cat person, a cat cafe is your favorite spot to hang out.
With the wave of new and unique Cat Cafes opening up around the world, The Cat’s Meow figured it’d be fun to chat with some of the great people who own and operate them!

Kicking off our cat cafe interview series, The Cat’s Meow had the pleasure of speaking with Chris Gutierrez, the Co-founder and Director of Chicago’s first-ever cat cafe, The Catcade Rescue and Lounge. Gutierrez was kind enough to describe the ups, downs, and everything in between of opening a cat cafe with an arcade twist. Learn all about his experience operating this unique spot with his girlfriend, Shelly, and, if you’re in the Chicago area, make sure to plan a visit!

1) Do you have any cats you call your own?

We sure do: Ricky Pancakes, Bella Waffles, and Layla Cupcakes. We call them our “home stash”.


2) What inspired you to open up a cat cafe that’s also an arcade?

After traveling to cat cafes and rescues all over the world, we finally decided to go all-in on our dream of opening our own rescue. While we loved the cat cafe concept, we wanted to do something that displayed our personality a little more. It was after a trip to Tijuana in January 2017 where we visited a cat cafe there that we officially decided to hit the ground running and get started on putting together The Catcade.
As a hobby, I spent years refurbishing old arcade games and decided to build them by hand. I built empty game cabinets that resembled cat trees and put nooks into the games so it incorporated the arcade theme into our cafe. 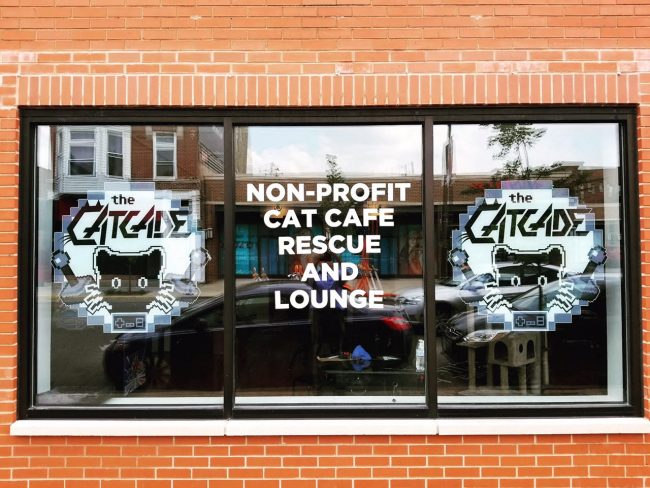 3) Do you think people spend more time playing with cats or games at The Catcade?

Most people are here for the cats, but, on occasion, we will get customers who are just as excited to play the games. Sometimes a parent or friend stay occupied with the games while their kids or friends play with the cats.


4) How many cats are currently at The Catcade?

This depends on the number of adoptions for the week. Typically, we fluctuate between 20-30. 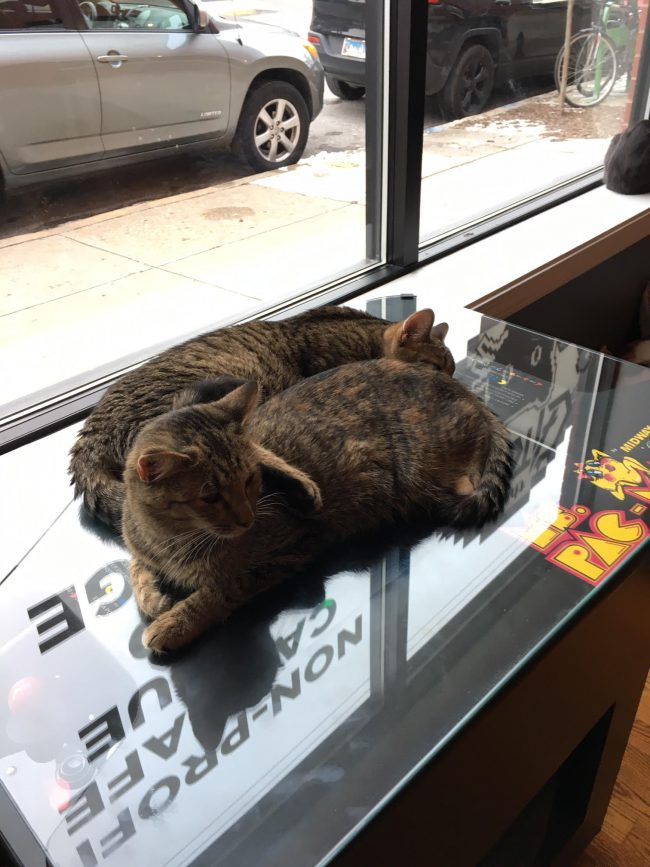 5) How many cats have The Catcade helped rescue so far?


6) What’s the best part of running The Catcade?

As a rescue, being able to physically put our hands in a cage and rescue cats marked for euthanasia. The most impactful thing is knowing that most of these cats would not have gotten this chance at a new life had we not opened our doors.
Seeing the joy on the faces of adopters. Being a safe space for people suffering from social anxiety. 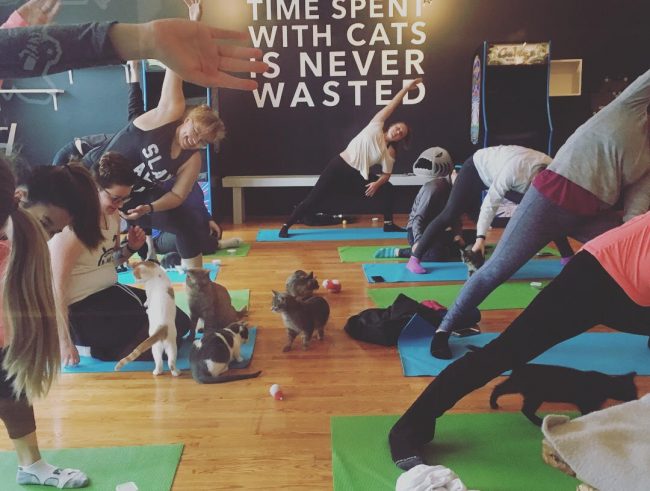 7) Are there any challenges your team has faced since opening The Catcade?

Getting through the licensing and inspection stage was the most difficult. Since we were the first organization to receive the cat cafe permit in Chicago, it came with its own set of complications and hurdles. And, surprisingly enough, educating people that you don’t actually bring your own cat to the cat cafe.


8) If you could make a cat-inspired arcade game, what would it be called and how would humans play it?

We’ve actually talked about this before and think that a game that replicates The Catcade, where you get to be a cat and walk around through the ‘cade would be cool. The goal would be to knock things off of shelves and tables. You’d also get bonus points for keeping other cats out of the crane game and not commenting on how tired we [the humans] look. 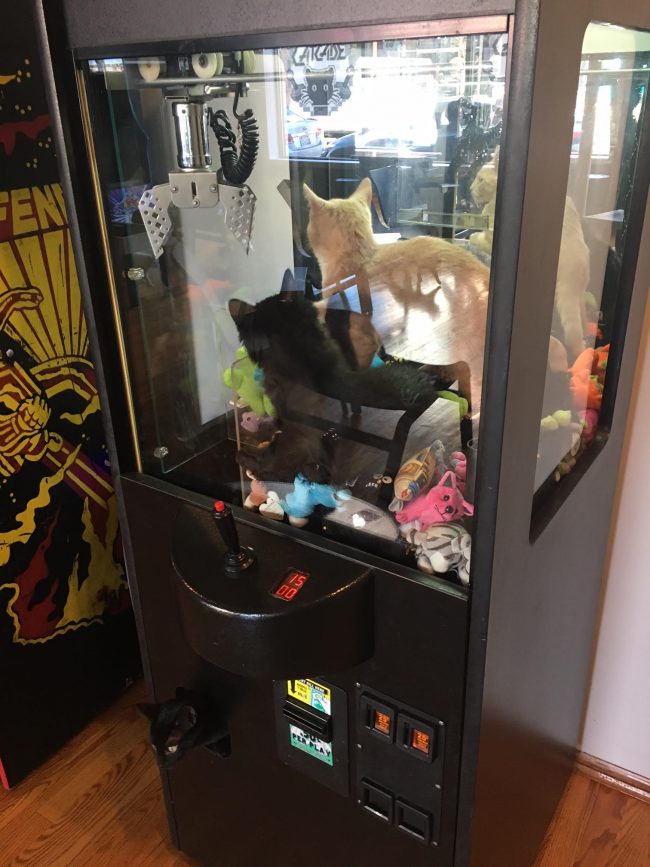 9) If you could make an arcade-inspired cat toy, what would it be called and how would cats play with it?

Our resident cat at the ‘cade is Leo, so it would be really cool to have a cat kicker that was him, sitting on top of an arcade game.


10) Do you have any plans on expanding Catcade to new cities?

While our doors have only been open for five months, we are growing at a rate we had not anticipated. We have tossed around the idea of opening a second location, but we just want to make sure we have a sustainable business model first. After that’s figured out, we can we put in place our plans for world domination. 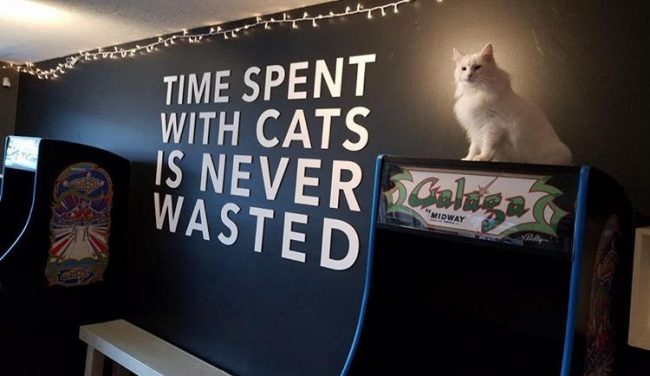 Honestly, both of us kind of can’t stand cat puns. We are clearly in the wrong industry.
Leave a comment
Share