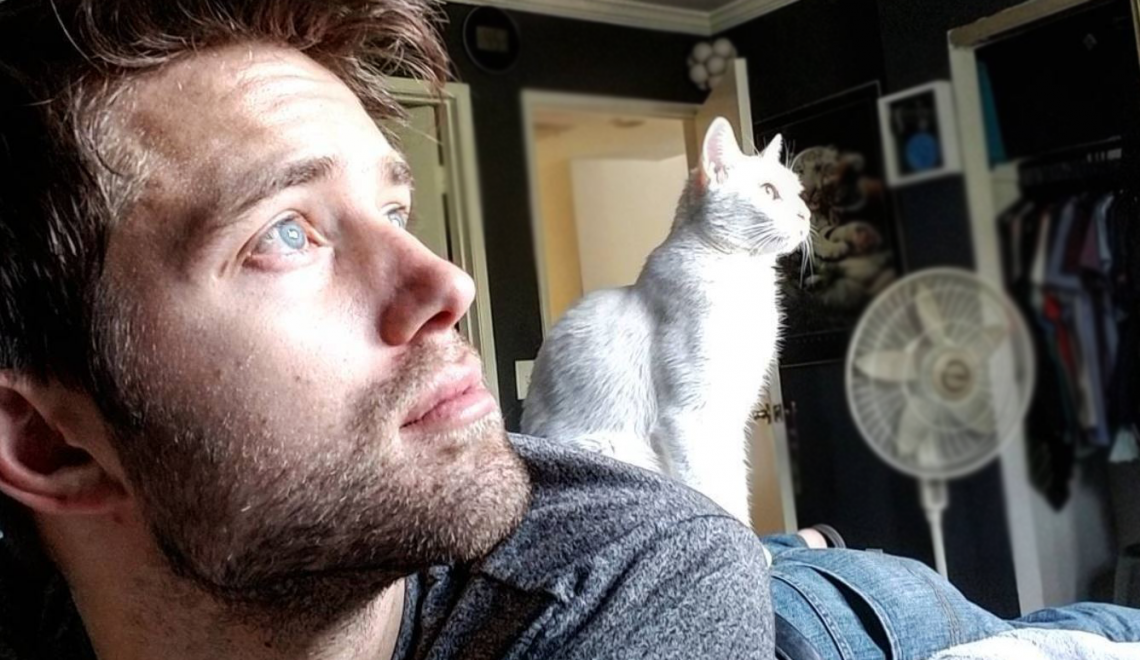 Today, we had the pleasure of interviewing rising actor and fellow cat lover, Nathan Kehn! Based in Los Angeles, California, he lives with four adorable cats, who often make starring appearances in his viral Instagram videos. Nathan has also built a really cool cat castle with vines on it (we forgot to ask him about this in the interview, but you should totally check it out here!). We loved learning about how Nathan’s cats have actually helped propel his career as an actor! Who knew that cats could be so helpful to building a resume?

How many cats do you have and what are their names?

I own three cats and my roommate has one who I’m also really close to. Mine are Ginger, Pickles and Annie. My roommate’s cat is named Princess. 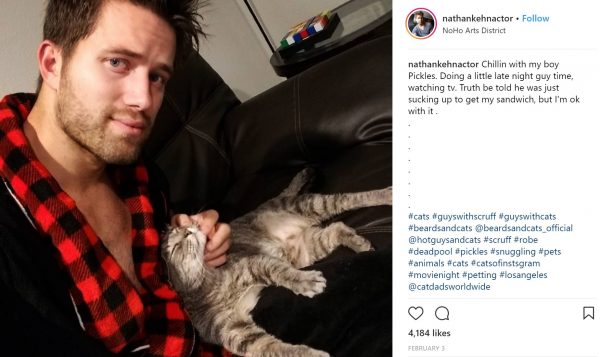 When did you first realize you were a cat guy?

I grew with all sorts of animals, but, I think I officially became a cat guy when I got my third cat, Annie. She was a five-week-old stray and I didn’t have the heart to turn her away, especially after Ginger assumed the role of her mom and started bathing her.

You cant have three cats and not be a cat guy.

Your cats are in so many of your videos! When and why did you start incorporating them as your co-stars?

Most of my following came after two of my cat videos went viral. After that, I realized there was no way my ugly mug could compete with my cats. So, I started using them in more videos and, so far, people seem to love it. I figured, if I could combine two of the things I love most- acting and cats- why not? 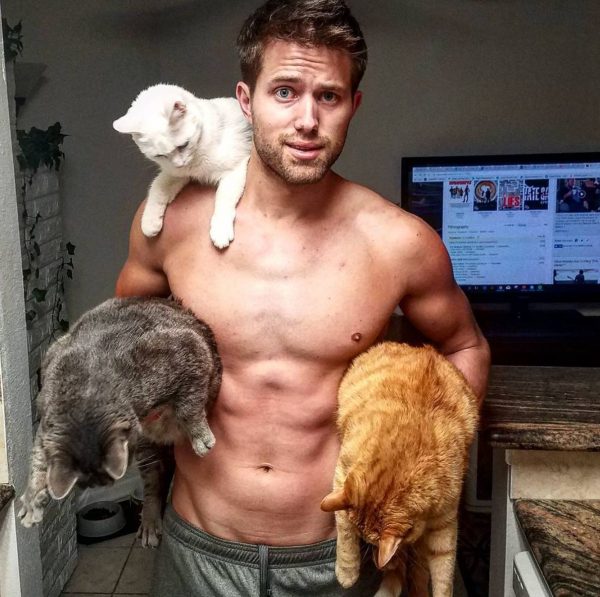 Of all the funny cat videos you’ve produced, which is your favorite one… Or top two?

I would have to say my top two favorite cat videos are the one with Princess on my shoulder hissing, or the one where Annie is asleep in her castle, all alone. I just got super lucky on the timing with both of those and probably couldn’t do them again in a million years if I tried.

How has being a dedicated cat dad influenced your career as a professional actor?

It’s really funny to me how owning cats has become a big factor in my acting career. I never really thought those two parts of my life had anything to do with each other, but Instagram has proved me wrong.

In today’s talent industry, an actor’s Instagram following can play a huge role in his or her likelihood of booking a job. In fact, I lost four commercials last year due to my low following.

Since I’ve filmed more videos with my cats, I’ve surprisingly developed a pretty substantial cat-loving audience! In turn, I’ve actually been getting more job offers, so I definitely owe my success to my cats (and I spoil them accordingly). 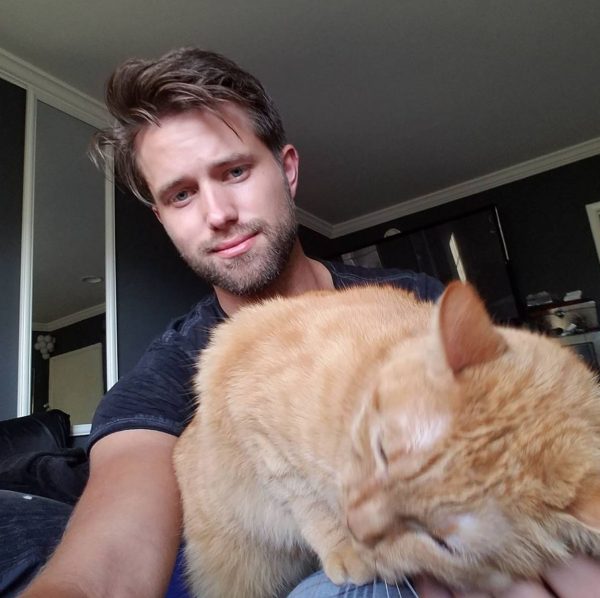 Nathan Kehn and his cat Ginger

Do you ever rehearse your lines in front of your cats?

Oh, I definitely run my lines in front of my cats. Most of the time, when I have an audition coming up, I’ll run my lines about 15 times before I even have someone else read with me. So, those first 15 takes are usually just me in my room, rehearsing lines to Pickles or Ginger. If they leave halfway through a page, I know it’s not going so well.

If your cats could speak English and give you acting advice, what would they say?

HAHA, if my cats could speak English, I think I would get four completely different responses.

Pickles would, most likely, tell me that I should just give up and spend more time at home feeding them.

Ginger would tell me everything I do is great, and I should’t change a thing.

Pretty sure Annie would only be willing to critique me if I was doing a happy scene and was petting her at the same time.

And, I think Princess would help me break down a character until she saw anything else in the room… At which point, she would forget what she was doing and take off to chase it. 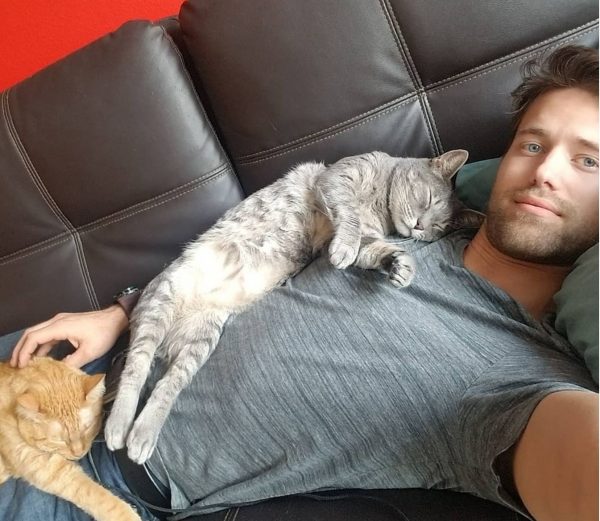 What do you think is the best part about being a cat guy?

I think the best part about being cat guy, and I realize this may be the most crazy cat person thing I’ve ever said, are the snuggles. I love watching a movie and having the cats climb all over me, or waking up to three cats purring on my chest and kneading (makin’ muffins). It’s a cool feeling knowing that an animal, who’s so small, completely trusts you.

Dogs always love their owners and give endless attention to them. With cats, you have to earn that love and attention from them. So when they finally decide to start giving you affection, it’s a pretty cool feeling.

My favorite cat pun would have to be one from my action movie cat video I did: “Hey, I’m not kitten around”… It’s such a dumb line, but I cant help but laugh at it.