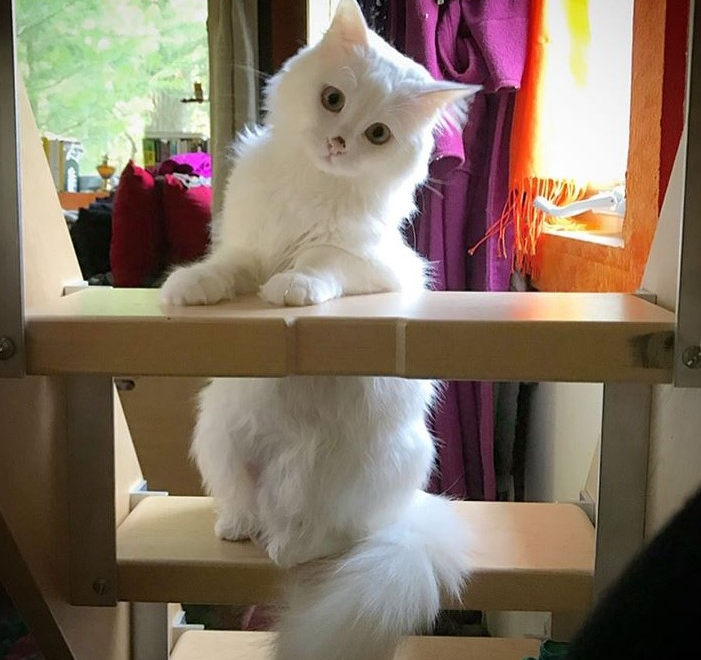 Today we’ll be taking a peek into the lives of community art organizer Miranda Aisling and her Qatari cat, Moira, and their tiny house home in Eastern Massachusetts!

For those of us who might not be familiar, what’s a tiny house?

A tiny house is, literally, a very small house. They’re generally about 150-300 square feet and are often built on wheels so that they can be moved. My house is 8 feet wide by 20 feet long with a loft for my bed and another loft for storage. The tiny house movement has been growing all over the country as people try to find affordable ways to live while making less of an impact on the environment.

What’s it like living with your kitty in a tiny house?

Moira and I do very well in the tiny house! It’s nice that she’s here all day while I’m at work, keeping the house active and used. She’s claimed certain areas, like the edge of my bed looking out a window, and the windowsill in my loveseat. Sometimes we have to share the sunniest spot in the house, but thankfully she’s a very cuddly cat and doesn’t mind.

How did you start living in a tiny house?

I built my tiny house as a public art project with my non-profit, Miranda’s Hearth. My mom and I led the project which had over 50 volunteers. The point of the project was to highlight forms of art that are often overlooked including woodworking, fiber arts, ceramics, and stained glass. There are over 100 pieces of art in 160 square feet! Throughout an entire year, people stopped by to see the house being built and to ask questions. At the end of the year, I hosted the second annual BIG Massachusetts Tiny House Festival. I’ve hosted the festival for five years now and over 10,000 people have toured my tiny home! Although Moira will be staying with a friend to avoid all the people in her space, you can come see my house, Aubergine, at this year’s festival on October 17th and 18th in Beverly, MA!

When did Moira start living with you?

I adopted Moira from her foster mom just over a year ago. Although I grew up with pets, I had never gotten one as an adult. Then I went to visit my friend, Rebecca, for dinner and Moira spent the entire time in my lap. I’d never met a cat that was so affectionate! Within the month, she’d come home with me. She was born in Qatar and was rescued through Evenstar Charitable Organization. She even has a Qatari passport!

Do you have any advice regarding living with a kitty in a small space or any tricks to share?

Even without a pet, living in a small space means I had to clean more often. Now that’s doubly true! She’s a little fluff ball so I’m constantly sweeping up and vacuuming after her. I do try to keep her on the same sleep schedule as me as much as possible, since if she’s awake, I know it. Thankfully, she tends to sleep through the night and doesn’t wake me up too too early. A lot of people wh live in tin houses have pets with them. I let Moira outside when I’m home and she gets out her energy running around. Otherwise, occasionally she’ll get the zoomies and run the entire length of the house!

Do you know any other Extraordinary Fameowlies? Let us know who you’d like us to interview next!

Miranda Aisling (ash-lean)’s mission is to reconnect art to daily life, a purpose you can see throughout her work as an interdisciplinary artist, community organizer, and avid poster of pictures of her cat Moira in beautiful surroundings.

In 2013, she launched her book Don’t Make Art, Just Make Something which became the subject of a TEDx talk in March 2014.  While sharpening her skills as a community organizer, Miranda has also continued to focus on her own art and creativity. In addition to making abstract oil paintings and writing books, she is a classical pianist and a singer-songwriter.