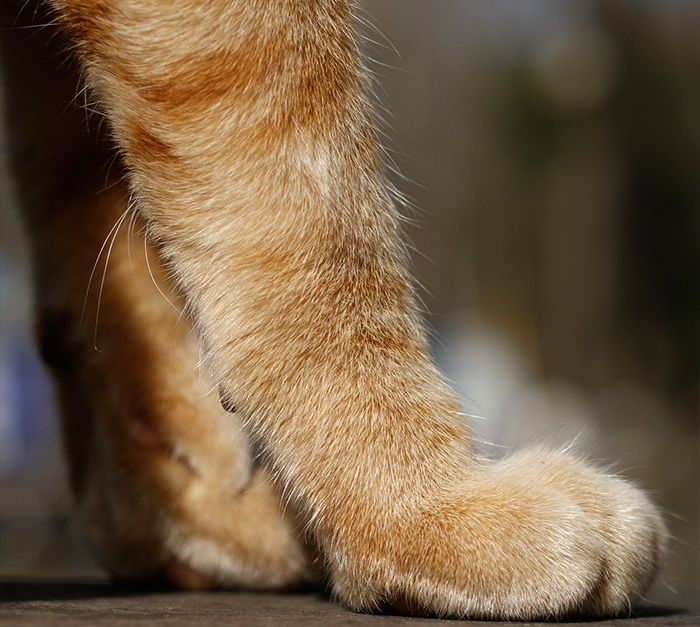 Have you ever carefully looked at your cat’s paws? If yes, aren’t they fascinating? They make you want to know what cat paws are all about. You have to admit they are cute to look at and touch, but is there something more to them? You might notice some cats pull away or even get scratchy when you try and get too close to their paws. This is pretty normal as cat paws are highly sensitive for a significant number of reasons related to their survival. Cat paws function as communication systems, help regulate body temperature, help in hunting, grooming, and so much more. Interested? Dive into the fascinating world of cat paws, and rest assured you’ll never see cat paws in the same way again. There’s more to them than just cuteness!

We’ve all heard the saying that cats always land on their feet. Cats are excellent jumpers and sure know how to land gracefully, too. Their paws provide extra cushioning, allowing them to land softly and silently. Paw pads soften landings when cats jump. Their highly sensitive paws enable them to feel the texture of the ground and gravity to make that well-calculated jump.

Cats are mighty good hunters. Actually, all animals in the cat family are mighty good hunters, and now we know it’s not just because of their impeccable strategic skills. They’ve got a secret weapon: their paws. In this case, a cat’s paws greatly aid in hunting. Paw pads have plenty of nerve receptors, which make them very sensitive to temperature, texture, and gravity. They can sense vibrations, pressures, and touch, which lets them know of any predators around and also aids in understanding the movements of their prey.

Cats also have retractable claws. By being able to bring back in the sharp spikes, the cat can move stealthy towards its victim and protect their claws from getting caught on anything as they go about their business.

We can all admit cats are always clean and looking all put together. How do they do that? A healthy cat can spend as much as 50% of their waking time just grooming themselves or another cat. They’ve got the paws for that and with the help of their forelegs and tongues, these are the perfect little grooming tools. At 4 weeks old, these little friends are ready to take their own baths. How do they do it? They first lick their paws several times and wipe them on the areas they can’t lick directly like behind ears, under chins, necks, or faces. After a few paw swipes, they pause to lick and moisten their paws before repeating the process.

We humans have numerous sweat glands all over our bodies that aid us in regulating our body temperature. But have you ever thought of how your furry feline cools down? They’re furry all over, so where could their sweat glands be located? Their paws! Exactly.

Cat paws have glands in their pads, and although small, they help the cat cool down on hot and humid days. You may notice wet paw prints on your floor or pavements on such days. But just like humans who not only sweat to cool down, cats also find themselves sweating when frightened, anxious, or stressed. Take note of your cat’s behavior! thepets.net is a useful site to find tips from veterinarians to keep cats happy and healthy.

You’ll notice the difference in the color of your cat’s paws. It is never random and you’ll definitely note a pattern. The color of the pads generally coordinates with the color of your kitty’s coat. Occasionally, the paw color will match the nose, which is still pretty impressive. White cats often have pink paws, and so do ginger cats! Tuxedo cats often have pink, pinkish-white, black, or a mix of these colors. Multiple-colored cats may have a mixture of these colors on their paws, too.

Ever noticed your cat scratching surfaces? Well, now you know it’s not just a dog thing! Cats scratch surfaces and objects to mark territories and broadcast information about themselves to other cats or animals. Cat paws have scent glands in between them containing pheromones that are deposited on these objects or surfaces. These scent glands are located in the hind legs too. The scent is packed with information about the scratcher.

Sometimes when cats urinate, they scrape the surfaces in turn, leaving scents that clearly mark their territory.

This may come as a surprise to many, but cats do tend to have a dominant paw. Like humans with their hands, cats have paw preferences, and you’ll especially notice this when the cat is doing a challenging task. A study by the Queen’s University in Ireland correlated paw preferences with gender. They found the males preferred the right paw compared to the females who preferred the left paw. The research is, of course, not conclusive, and you can find out your own cat’s paw preferences when you give them a challenging task like fishing treats from a hard-to-reach place. Do it several times and take note of which paw kitty prefers on the go.

These furry felines are so agile and flexible that we suspect it could be one of the reasons that get them in trouble. Aside from their unique spine that gives them superior flexibility, their paws are also incredibly flexible. This paw flexibility comes in a handy for in hunting and climbing. Think about it! Their front paws are designed to turn inward to sink claws into branches. This aids in stability and pulls them up and around obstacles. Now all this is great until the cats need to get back down. See, the cat’s paws were designed for climbing up rather than climbing down. This is because their retractable claws are curved, and their hind legs are more durable than their front, and this physiology that makes them unable to maneuver back down as easily. This is why cats sometimes get stuck in trees.

Paws are genuinely fascinating and so significant to a cat’s survival. As a cat owner, it is advisable to always keep an eye out for your kitty’s paws, seeing as they are sensitive and contain a lot of neurons and blood vessels. Having their sensitive paws touched roughly is one of the things cats hate! With the soft padding and retractable claws, the paws are more susceptible to hidden dirt, foreign objects, cuts, cracks, and/or underlying infections. Regular checking of your cat’s paws enables you to protect them better. Seek out a vet’s opinion in the event you notice anything unusual in your cat’s paws!

Our team of certified veterinarians and writers at The Pets publish and update insightful articles full of valuable information, honed by many years of experience. Our pet experts strive to provide you with the most reliable information about how to keep your animals healthy and happy.