Paws: Can you name all the parts of your cat’s paws? 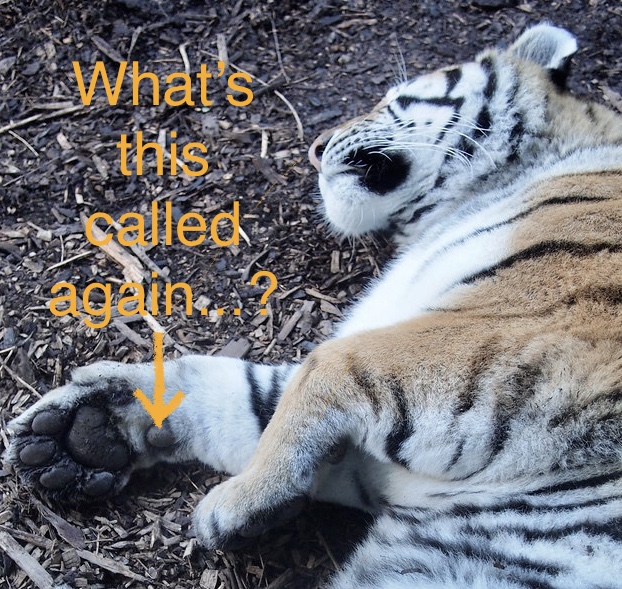 How much do you really know about your kitty’s paws? A cat’s paws are used for batting at fun toys, grooming, nudging you for attention, and even giving high fives! Touch is one of the most important ways you and your kitty can communicate, but few people can name more parts of the paw beyond the claws and toes, so here’s a top-to-bottom review of your kitty’s paws!

This tiny pad of skin on your cat’s leg above the paw is called the carpal pad, and even big cats have them! The skin can be white, pink, black, brown, or a combination of colors. While it may seem unnecessary, and in indoor cats is usually free of calluses, it provides extra traction when jumping down or moving downhill.

While our next feature is similar to a thumb, there’s no exact analogue for the carpal pad in people!

While a dewclaw might sound like something a mythical creature would have, it turns out cats are magical enough to have them, too! The dewclaw is the toe and attached claw forming your cat’s “thumb.” Your cat’s dewclaw isn’t as helpful as it is in some other animals, although it does sometimes aid climbing or balancing,  it still has one key use. Your cat uses their dewclaw to get a good hold on their toys!

The “palm” of your cat’s forelegs is called the metacarpal pad, but on the hindlegs it has a different name: metatarsal! The pads in the center of your cat’s paw are hairless, and they may even sweat when your kitty is hot or nervous.

Humans also have a metatarsal pad located just behind our toes, forming the “ball” of our feet! Just as you would expect, these four soft landing pads not only help cats to walk, run, and jump, but also make safe landings. Surprisingly, studies have shown that the front metacarpal pads play a role in how skillfully your kitty lands!

However, there’s a part of the paw you wouldn’t expect to be so important to movement…

Toes! Cats are actually evolved to walk on their toes, making them digitigrades like dinosaurs, birds, and yes, even dogs. These cute little beans at the end of the paws support their weight while walking, similar to when children sneak around on their tiptoes.

The ability to move silently on their toes aids hunting, but it would be nothing without the sharp tips at the end!

The claws tipping your cat’s pads are probably your LEAST favorite part of your kitty, but they are vital to your cat’s ability to move. They aren’t just for scratching up the furniture! During jumping or sprinting, the claws give traction to your cat’s largely smooth paws. Similarly, they help your kitty squeeze their toys, especially when they’re digging their back paws into kicker toys!

And a special subset of kitties have extra claws!

A small minority of cats display polydactylism, which can cause them to have more than four claws (and of course toes) on some paws, or even to have dewclaws on their hind legs!

Can you name all the parts in your kitty’s paws now? The next time you watch them batting at their new favorite toy, you’ll be able to appreciate how these complex parts work together for each swipe. Leave us a comment on your kitty’s paws and let us know if there’s anything you’d like us to cover next time!